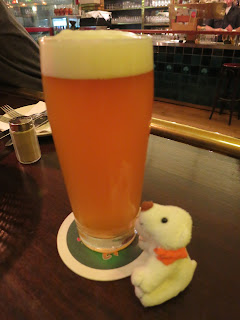 "Distinctive" is not a word that you can usually use when describing German beers. There is a distinct conformity clogging up the whole of German brewing, visible nowhere clearer than in German brewpubs. Almost without exception they will offer the same tedious triad of beers; in Bavaria it will nearly always be light lager, dark lager, and wheat beer, with some slight variation in different regions of Germany.
It's a relief then, to find the odd exception, such as Berlin's Brauhaus Südstern, which offers "special" beers including IPAs, brown ales and fruit beers.
One of its beers, an unfiltered lager, is available at Berlin's "Max & Moritz", one of those places described as an "institution", although for what type of inmate it doesn't specify. This means that hardly any of the punters in there will be speaking German, the menu will have English translations, and the food will be overpriced. Never fear, though, for the beer, "Kreuzberger Molle", is one of the most distinctive in Germany. It has a surprisingly creamy element for a lager, and like Franconia's unfiltered lagers it goes down without you even noticing it. Fosters it ain't.