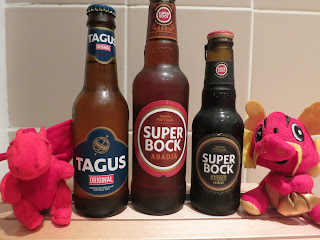 The law of beer advertising states that the quality of a beer will be in inverse relationship to the amount that it is advertised. That's not to say that all beers that don't get advertised are good; rather that if a beer needs to be advertised it's probably crap.
After all, if your product is some revolting excuse for a lager that is bunged full of adjuncts and has a one day lagering time, it's not like people are going to drink it because it's any good. But sponsor some sporting event, bung it on TV every 30 seconds, maybe pay to get James Bond to drink it instead of Vodka Martinis, even drape it in a national flag, and people will be lining up to guzzle it with scarcely a care for that fact that it tastes like piss.
This law pretty much holds wherever you are. In Germany the few "national brands" that you see adverts for like Paulaner are renowned for being crap. Portugal isn't known for its beer, but there's a few home grown brews which pretty much reinforce the law.
"Super Bock" is advertised everywhere (there's probably a similar law for things that are sold as "super"), and comes in a number of varieties. Look on the ingredient list and it's adjunct city, predictably. This particular variety is called "Abadia" and lists sugar but no maize unlike the others. "Tagus" is another one that I encountered in a posh supermarket which I hadn't seen elsewhere, and seems to do without advertising - its label however proudly proclaims it to be an all-malt beer.
Any decent lager has an immediate crispness, and Tagus certainly does. It's nothing to get excited about, but is a perfectly pleasant drinkable brew with a lemony zest. "Super Bock" definitely lacks it - the contrast between the two is enormous. The bland, almost non-existent taste suggests that the budget went on advertising rather than lagering time.
There was also a Super Bock stout. It wasn't very interesting.