I discovered a new German online beer retailer, Biershop Bayern, and what caught my eye was that they stocked beers from Camba Bavaria. These geezers brew a range of foreign styles as well as the usual German styles - they do an IPA, a pale ale, a porter, a stout and a brown ale. They only flog them in crates of 9 so I had to think twice, but I gave the pale ale and the IPA a chance. The porter and stout I had to leave till I'd confirmed that they knew what they were playing at, as German "porters" can be vile. Delivery is very prompt and everything's well packaged. 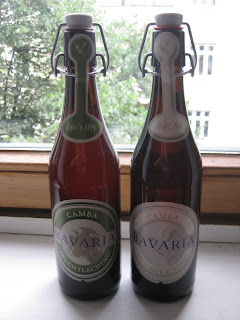 I'm pleased to report that they're both perfectly genuine brews, the IPA coming in at 8% and being very heavily hopped, the Pale Ale clocking in at 5% and being less hopped but still well endowed.
I'm not sure who Eric is... 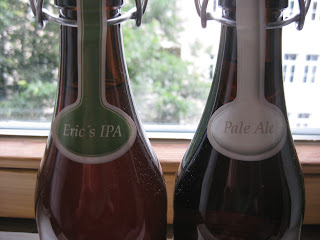 Although I'd previously had a few good German IPAs, such as the Braufaktum one, they were all severely overpriced, meaning that it was much cheaper to get imported ones. These were more reasonably priced though at about 20 Euro for 9 bottles. At first there's the novelty factor of drinking a citrus hopped German beer, but after a while they did seem to be a bit one dimensional.
In all though Camba Bavaria deserve credit for trying something extremely unusual in the German brewing scene. Once I've polished these fellas off I'm gonna give the porter and stout a seeing to.
Posted by Beeron at 07:23