There are quite a few brewers of watery adjunct ridden pissy lager who, presumably to stop their brewers hanging themselves, will sometimes have a stab at making a decent beer. Thus we have Super Bock "gourmet", Peroni "gran reserva" and this fella, who grabbed my attention in El Corte Ingles. 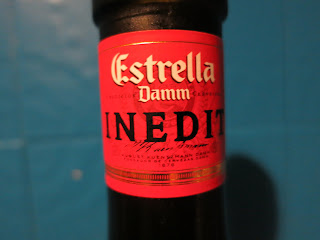 It comes in a 75cl bottle with some poncey tags and stuff hanging off the top, like those jars of jam with hats on that you find at some posh shop in Devon. With wheat, barley and spices in the ingredients this promised to be another southern European brewer having a shot at a Witbier. 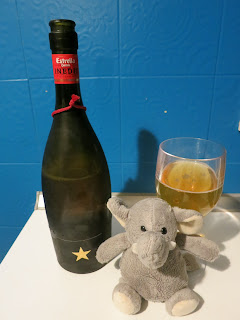 Spices in a Witbier should be like the icing on a cake, not the cake itself. Here, the spices were too prominent because there wasn't enough backing to them from the beer - altogether too lacking in any guts. Perhaps Estrella Damm should stick to lager.
Posted by Beeron at 17:54