Not the Stoke which produced Lemmy, or the Stoke who like to kick lumps out of the shins of persons wearing red and white outfits, but rather the Stoke brewed in Nelson, New Zealand by the McCashin family. 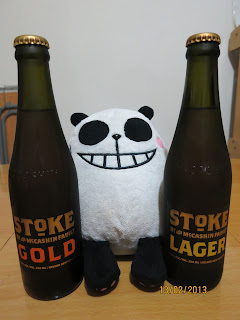 Beer in Hong Kong is unfortunately dominated by the evil Triad of Heineken, Carlsberg and San Miguel. If you cross their path, you may wake up to find a bag of decaying barley under your bedsheets (which they would have otherwise used to make their foul excuse for beer.)
But if you make an effort you can find decent beer without much trouble. Even in your bog standard supermarkets you can find some decent imported stuff like this: and at less than £1.30 or so a bottle you don't have to be Li Ka Shing or borrow from loan sharks to afford one.
They claim it's brewed with 14,000 year old water, and is made "the old fashioned way", with "bespoke" yeast, whatever that means. Despite that it's a very decent quaff, especially on a humid day. The 'gold' in particular has just the right floral / spicy side without getting in the way of things.