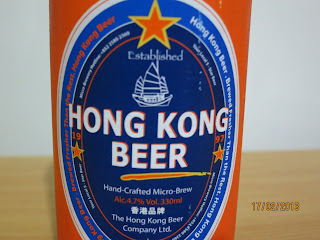 Most beer actually brewed in Hong Kong is locally brewed under licence Europiss like Carlsberg or Heineken, or San Miguel from the Philippines (you can get both the locally made and original San Mig in supermarkets). This one is a happy exception though: it's 'hand-crafted', although presumably not literally.
It reminded me straight away of a Brewdog lager I had once; floral hops, although there was something subtly different about them from the bog-standard citrus hops you seem to get in every IPA. My Mother-in-Law said it tasted like soap, although that was because it's probably the first hoppy beer she's tasted. I'm sure we've all overheard a conversation in a pub when, faced with a round of drinks on the bar and unsure which is which, someone might try one at random and ask "errrr... did someone order pineapple juice???" when it's actually a citrus-hopped beer.
As is depressingly  familiar though, to purchase this you have to go to a poncey foreigner-oriented supermarket; the local ones don't stock it, although there are a few bars around town that have it.

Next up: Mesquita from Cordoba in Spain. 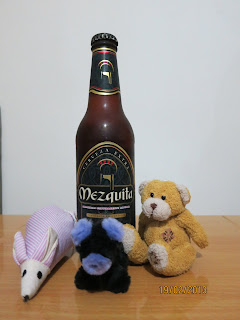 To be honest I didn't know exactly how to approach this at first: I wasn't even sure if it was a lager or an ale. I had it straight out of the fridge, although the ABV strength of 7.2 and the dark pour suggested I might have been better off letting it sit for half an hour. It is a lager though, but unlike the Hong Kong Beer it was totally over to the malty end of the spectrum. When I taste a strong very malty lager I can't help thinking 'tramp juice' but this was far from it. Certainly one I'd look out for if I'm ever in Cordoba again (and if they actually sell it in Cordoba, of course. It wouldn't surprise me if you can't actually get it there.)