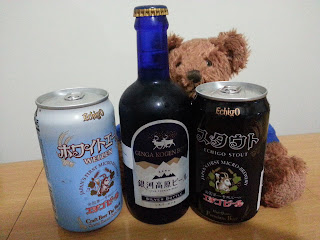 Germany taught both China and Japan to brew beer. In the case of China the diktat about all-malt didn't last long - the vast majority of beer from China is practically undrinkable piss, although it's cheap ("Portillo's wife defends crack habit").
In the case of Japan, though, the German influence still remains. All the major Japanese brewers continue to brew all-malt beers, and furthermore Japan is dotted with German style brewpubs, some even going as far as to dress the waitresses in Bavarian outfits. Unfortunately they seem to also have inherited the German penchant for fairly bland beers, and a restrictive conservatism - none of the main Japanese brews like Kirin, Asahi or Sapporo are particularly interesting.
They're very widely available in Hong Kong supermarkets and convenience shops though, and seeing as they're scarcely more expensive than the locally brewed adjunct ridden stuff, I might pop a few Kirins in the trolley sometimes to drink with dinner or something. Whilst in the foreigner oriented supermarket in Hong Kong's financial district though, I spotted some beers from Japan's nascent craft brewing scene. 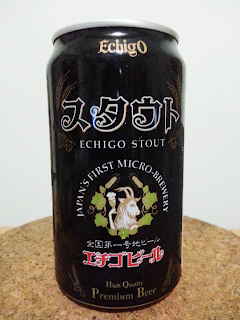 First up was this stout from Echigo, "Japan's first micro-brewery". On the rear of the can there's an outline picture of a geezer playing a saxophone, so I imagine Echigo thought that you would sip this whilst in a jazz bar or something. The can also tells you that it's "high quality premium beer", which I think is blowing its own saxophone a bit. The beer itself was very good though, with a decent coffee after-taste. Reminded me of Sierra Nevada's stout. Niiiiice. 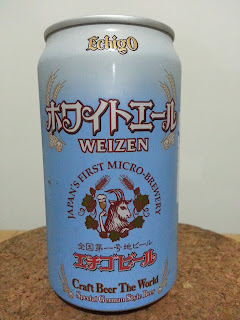 From the same brewery comes "Weizen", which on the reverse of the can tells us it's a "White Ale". There's a picture of what I presume is a Bock on the front, which was a bit confusing, and on the back there's a picture of a Bavarian-outfitted couple toasting each other. There's also a slogan exhorting us to "Craft Beer The World", which confused me even more.
Upon popping the can, I was greeted with a smell which made me think of a fizzy drink, an impression which wasn't diminished in any way when I tasted it. It didn't really remind me of either a German Weissbier or a Belgian Witbier - there was far too much carbonation. If Echigo are really attempting to craft beer the world they should probably try it with their stout.
They also make a red ale, not pictured, which was very decent. So as the famous piece of lard 'Meat Loaf' once told us, 2 out of 3 ain't bad for Echigo. 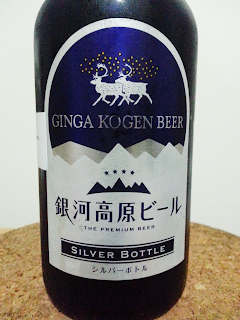 The prize for the most interesting bottle goes to "Ginga Kogen Beer", although at one point it was almost mistaken for a bottle of Chinese medicine, which would have been a shame. According to their website, their beer "delivers the charm of the beer based on German traditional technology." That may well be, but this particular one, "Silver Bottle" to me was  much closer to a Belgian Witbier than a German Weissbier, and was the pick of the four. Banzai.