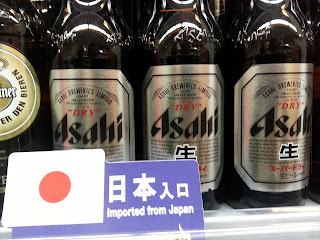 We're all familiar with the idea that, with big name 'international' beer brands, there is little relationship between the beer itself and the brand name - 'Carlsberg' and 'Heineken' are just names slapped on to any locally made piss. The extent to which beers with a certain brand name are consistent varies; of course 'Guinness' is always going to be a stout, but the recipe and quality will vary enormously depending on whether you're in Dublin, Frankfurt, Kuala Lumpr or Addis Ababa.
When such beers arrived in the UK, and the beer drinking public cottoned on to the fact that the fancy Eurolager that they thought they were drinking was actually brewed in Bishops Stortford, then there were many advertising campaigns for the real imported ones which went out of their way to stress the origin of the beer - 'brewed in Bremen... Germany' etc.
So if you want to be sure that the beer you are drinking is the genuine one from the beer's country of origin, what do you look for? You might familiarise yourself with the original design of the bottle label, or you might look for something saying it was an imported one, as batches of the beer destined for export might have an appropriate label to draw your attention to this.
For example, if you saw this: 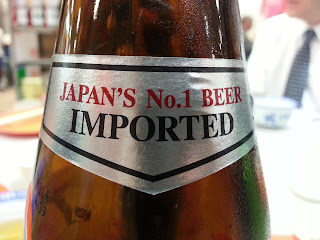 then you might, not unreasonably, believe that this beer had been imported from Japan. If, on the supermarket shelves, you also saw this: 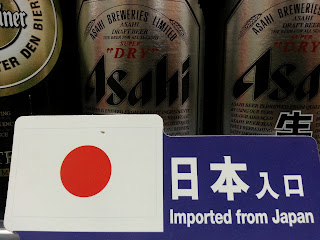 Then this might well confirm it.
Unfortunately that would not be the case. Imported it may be, but the country of origin is China, not Japan. Closer examination of the back of the bottle reveals: 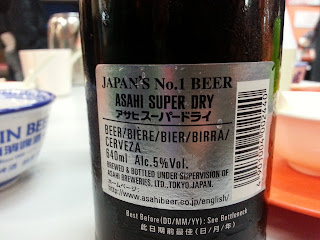 Yep.... it's brewed under 'supervision of'' Asahi of Tokyo... in fact, Asahi in this form in Hong Kong is made at the same brewery as the local Carlsberg, in China.
As for the label in the supermarket, claiming it is 'imported from Japan'? Lies.
Consumer protection law isn't big in Hong Kong. A flat here may be advertised as being 50 square metres, but that area will include the area of the shared lift and corridor outside... claiming a beer is imported from Japan instead of China is small beer.
Posted by Beeron at 01:21