Hong Kong has quite a few beer bars dotted around town - the problem is they're all the same. The names are different but there the similarity starts; they're all part of the same chain with the same beers and menus.
Some comedian thought it would be amusing to divide the menu up into "boring beers" and "interesting beers". 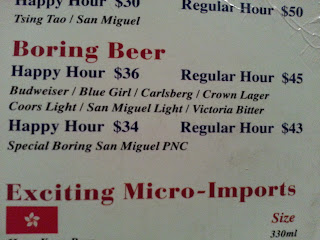 At least it used to say "interesting beers" the last time I was here 5 years ago - now it's changed to "Exciting Micro-Imports", which both loses the effect, and is totally inaccurate. Fulller's, for example, are probably both delighted and disturbed to discover that they are in fact a micro-brewery. 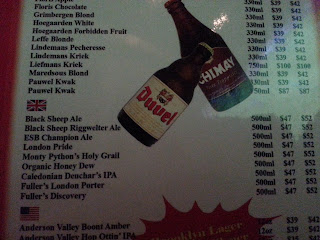 Yes, a Grimbergen is considered an exciting micro-import, so even Inbev are a micro-brewery according to these beer gurus.
You might expect that a chain of bars that makes a big deal about having exciting micro-imports might just have some sort of clue about arcane concepts such as the optimum temperature to serve different styles of beer, but no, everything's served at meat-locker temperatures, so the exciting micro-brew you ordered might end up being not that distinguishable from a boring beer. Next time I'll try a red wine and see if it gets the same treatment. 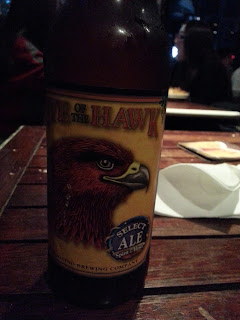 This would have probably been a fine beer had it been put in a sauna for 20 minutes. There are large bowls of nuts forced on you constantly, the shells of which you are encouraged to chuck on the floor in an utterly hedonistic manner; the nuts themselves help to disguise any taste the beer might have had had it not been too cold in the first place.
The most well known of these is on Causeway Bay on Hong Kong island, and is nowadays named "Inn Side Out". This is immensely popular with local office workers at both lunchtime and evenings; rarely for Hong Kong you can "al fresco", if you don't mind queuing for one of the outside tables; inside it's easier to get a seat.
"Slim's" is another branch closer to the financial district. The pale ale they had on tap was splendid, and almost exciting. 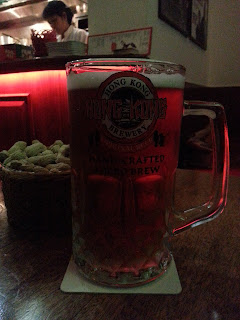 On the south side of Hong Kong island is a tacky foreigner enclave called Stanley, where on the seafront can be found the small "Vern's beach bar". This makes a fairly feeble attempt to convince you that you are in Honolulu.
As in all of these bars, you won't hear much Cantonese spoken. In this branch, though, you will overhear many conversations taking the following form:

There is in fact massive scope for devising drinking games whilst listening to such conversations, an exercise which I leave for the reader (Shane Watson - did you hear that?).