Is Czech beer more interesting than German beer? I intend to find out.
Perusing the beer section of a Prague supermarket, I noticed that, as well as the Czech brands well known outside the country, there were countless brews I'd not heard of as well. They are also all pretty cheap, around 60 cents a shout, so I grabbed some at random and dragged them back to the batcave. 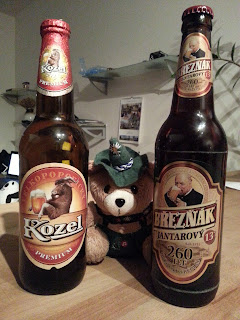 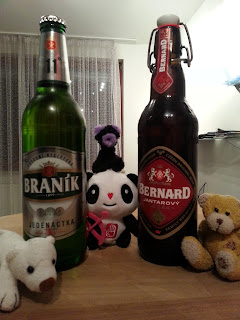 Branik was pale and at first taste seemed run-of-the-mill, but grew on me the further down the glass I got. Bernard had a giant head on it, slightly sweet, but very distinctive. 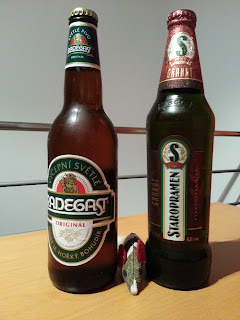 Radegast was a decent brew, easy quaffing - whether it was named after the wizard though I don't know.
So far all the beers were recognisably superior to the vast majority of German beers I've tried - although nothing to write home about, they were all beers I could quite happily drink regularly. However I'd also chucked a Staropramen into my trolley, so that I could do an 'unknown brand vs international brand test'. Switching to this from the Radegast instantly showed the Staropramen up as utterly tasteless and bland, pretty much like a Helles.
In future I'll stick to what I don't know.