Some people can wax lyrical Jilly Goolden style about the beer they're drinking, describing the outlandish flavours they're picking up, like sawdust, essence of cow, roasted tissues, tables, and coat-hangers. A quick perusal of RateBeer will unearth all manner of unearthly flavours which would probably flummox the actual brewers.
Personally I find 90% of this stuff to be a load of old bollocks, but occasionally I might try a hand at it, but usually only as far as pretty basic stuff like 'fruity'. The first time I ever described a beer as 'fruity' was a couple of decades ago when I described the cask ale in the Hadfield in Sheffield in such a manner. A bloke who worked behind the bar later enlightened me that the 'fruity' taste was probably a result of the copious amount of slops that Fat Rob the landlord recycled, and his habit of scraping the sediment out of the casks to eke out every last bit. Since then I've tended to keep my mouth shut.
Recently though I did come across a couple of fruity numbers. 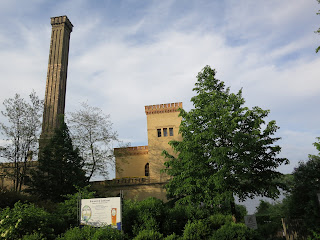 "Brauhaus Meierei" in Potsdam is a truly wonderful place. Set in an old monastery style building by a lake, it features some exceptional beers. 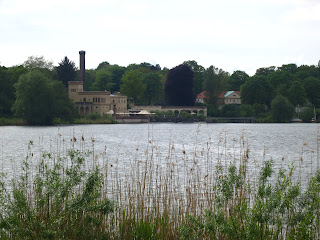 To their eternal credit they don't just churn out the same selection as a normal German brauhaus, but actually do a Berliner Weisse. Apart from the usual Kindl, this is the only time I've found this style. Whereas Kindl is 3% this one is 5%, and has more sourness than the slightly tamer Kindl. 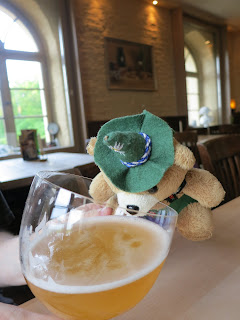 They still serve it in a traditional Berliner Weisse glass, and still with a straw - I never could quite work that out.
The star of the show though is their awesome unfiltered Maibock. Many Maibocks in Munich can be a bit tedious and overly malty - this one isn't. It's fruity - and I can say that without fear of finding out later that it's actually because of sediment and other peoples' saliva. 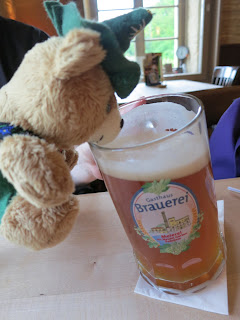 It's extremely rare that I find a German bottled beer that I would be happy drinking as my regular, but I was very pleasantly surprised recently by a bottled Maibock.
"Dresdner Feldschlösschen" is what it calls itself, and is another to which I grant the esteemed title 'fruity'. 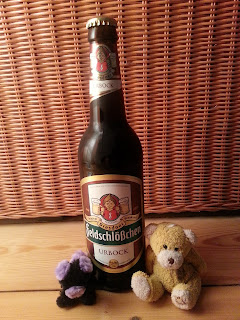 I name these two Maibocks "The Fruity Buds of May".
Posted by Beeron at 20:11