"Netto" isn't really a shop you would go to to get your beers unless you had to. They arrived in Britain when I was a student, and boy did I make good use of them. They did 'Saxon Bitter' and 'Viking Lager' for what I seem to remember was around 20p a tin; nowadays that doesn't seem unusual but back then it was.
Of course the quality wasn't up to much; they were around 2-3% and, to be honest, if I was a Saxon or a Viking and found myself in Valhalla, and was given either of them to drink, I would probably cleave off the head of the serving wench and think that dying with a sword in your hand really wasn't worth the effort.
They sprang to mind when I checked out a Netto on its own turf in Copenhagen, and saw a 'Viking IPA'. 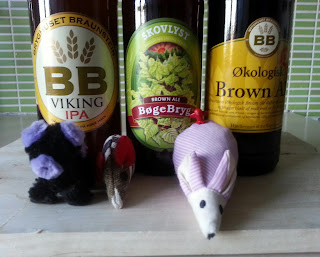 It's brewed by Danish brewery Braunstein, and I'm sure it is not remotely related to either of the beers I downed by the sackful back then.
It's a very fine IPA as it happens; the hops noticeable but not overwhelming, and pleasantly florally like Copenhagen itself. Netto also do a couple of decent brown ales by local brewers. At 20-25 Krowns, they clock in at about the £2.50 to £3 mark, which would have had me fainting back then but is about par for the course in Copenhagen.
They also stock beers from the celebrity brewers Norrebro Bryghaus. These come in a bottle which sort of looks like it's just trying to be different; at first I mistook them for vinegar. 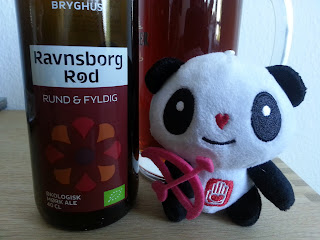 They claim their red ale is rund and fyldig and who would argue with that? It's certainly decent but not up to the standard of most Mikkellers I've had.

Moving from one extreme to the other, we proceed to the pompously named 'Magasin Du Nord', one of Copenhagen's le-pomp-du-pomp department stores. 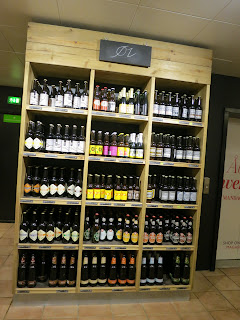 For anyone into their Scandinavian craft beers, the beer selection here will have you sweating out of 11 different orifices at once; a good selection of Mikkellers and other top Danish craft brewers, along with some Norwegian bods. Arrive with well stocked pockets though. 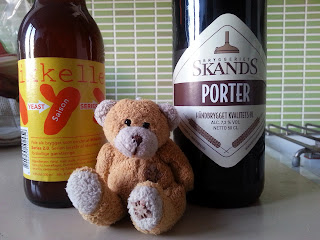 The Mikkeller 'Saison' was about the cheapest there at around £4 for a small bottle, but was sufficiently superb to make it worth it. The Skands Porter was regularly priced and a good example of the style. When I find a misplaced suitcase on a train stuffed with 1000K notes then I might try some of Mikkeller's 'barrel aged' stuff. 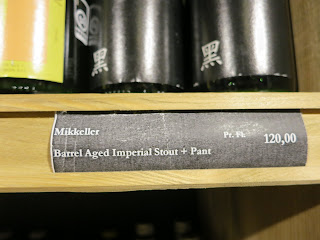 "Irma" is a sort of midrange place a bit like Rewe in Germany. It seems just about every supermarket in Denmark is well stocked with fine examples of Danish craft brews. 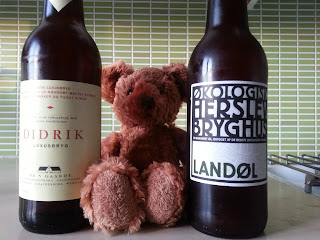 The Didrick Luxusbryg was thick, syrupy and treacly (if any of those are possible) and tasted like a Christmas pudding; I wish I'd bought 10 of them. The Herslev Økologisk Landøl on the other hand was a bit flat and lifeless; maybe I got a dodgy bottle.
Posted by Beeron at 20:13