Dinkel (Spelt) apparently used to be an important part of our diet in some parts of Europe, but now it's a "relic", surviving mainly in bio and health products. Lammsbräu are a fine brewery so the combination sounds promising. 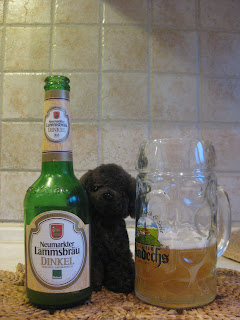 It's extremely cloudy with a moderate head, and a slightly unusual hue. The ingredients list malted barley as well as malted spelt, although it doesn't say the proportion of each. According to my limited understanding, this can be called beer under the 1993 beer law, because it's specifically malted spelt, whereas under the reinheitsgebot it wouldn't have been allowed because of the presence of the spelt... it's all a bit confusing. Why not have a law that says, "you can put what the bugger you like in beer as long as it says on the label what's in it and it doesn't poison any one. If you make something as sickeningly vile as John Smiths Extra Smooth and someone actually buys it, well then congratulations to your marketing department."
Under the label where it would normally say "brewed according to the Reinheitsgebot", it says instead "brewed according to the ecological Reinheitsgebot" 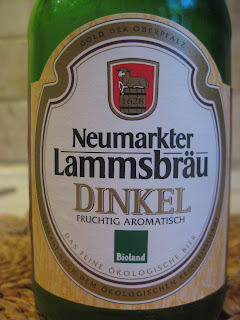 It seems then that we can start defining our own Reinheitsgebots if its narrow strictures don't fit out beer. Maybe John Smiths should start selling Extra Smooth here, which can be marketed as "brewed according to the Alchemists' Reinheitsgebot".
The beer itself is definitely one for drinking outdoors during the summer. It has the smell you would encounter whilst wandering through a field of tall wheat and grass looking for a severed limb after an encounter with a combine harvester. It's not a beer you can drink fast, although it's absolutely not unpleasant. Thumbs up again to Lammsbräu.
Posted by Beeron at 07:01