The term "Craft Beer", its different connotations, the arguments / brawls about its meaning or lack of it have not even remotely entered the radar space of even your most enthusiastic German beer drinkers. If you explain the term to them, the conversation will go "Ah soooo.... well you see here in Germany all beer is brewed like this, because we have our purity law which states that BLAH BLAH BLAH YES SHUT UP PLEASE".
To be honest, German beer varies as much in quality as American, Danish or Italian does. An Oettinger plumbs the depths as much as Carlsberg or Bud, and an Uerige Dopplesticke soars in the heights as much as a Beer Here or a Goose Island.
So is there anything which might be called German craft beer?
First up you might consider the "reassuringly expensive" range of beers from the likes of Hopfen-Fluch or Braufactum. These will usually be grossly overpriced imitations of non-German styles like IPAs or stouts. They are always of a decent standard, but unfortunately they usually cost around twice as much as importing the real thing from abroad via websites like Bierkompass or Bierzwerg.
Then there are the hardy souls who risk the wrath of the German brewing mafiosi by occasionally flaunting the 'gebot, like Stortebeker or various old east german breweries who sometimes add sugar to bottom fermenting beers. Unfortunately these vary in quality enormously, and quite frequently are disasters in bottled form.
But the closest I've come to what might be called craft examples of native German styles are often the manufacturers of Bio beers. There is a Bio shop in town which has become my haven when my stock of foreign beers has dried up. A broad minded German beer shop might have a ratio of 90:9:1, meaning 90% Bavarian beer, 9% non-Bavarian or national brands, and 1% foreign beer (some Czech pils, and a Guiness if they're particularly cosmopolitan). A typical one though might have a ratio of 95:5:0.
Bio shops however, because there aren't that many bio beers, will have a selection from all over Germany. And from my experience bio brewers tend to be the very small, dedicated craftspeople that are associated with craft beers. My two favourite Kolsch and Alt styles are Hellers and Pinkus, both bio brewers. And these two splendid fellas from Neumarkter Lammsbräu made me kick myself for not trying them earlier... 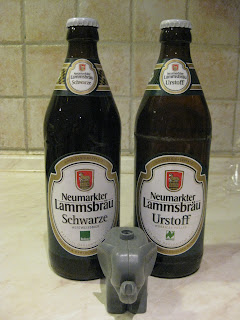 The Urstoff is a Helles which surprised me by its orange colour... 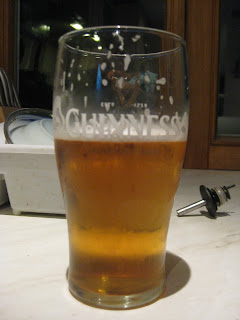 It has a splendid syrupy, caramel taste which I would have never guessed possible from a Helles, normally a style I find utterly tedious. Without doubt the finest example I've come across. The Schwarze is equally syrupy in a black way, if that makes sense. Again, the best example I've found. These two are firmly installed on the front row of the grid in the German beer grand prix. I can't wait to try their Weisse and Pils.
Posted by Beeron at 07:34