Six of the best

Quite a few Czech breweries do these 'mega party assortment' packages, consisting of a number of beers and a glass chucked in, and maybe some balloons or something. 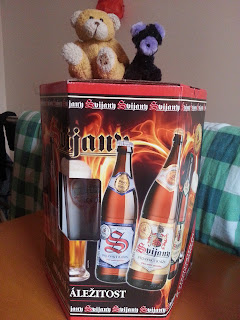 This one from Svijany has all non-pasteurised brews. 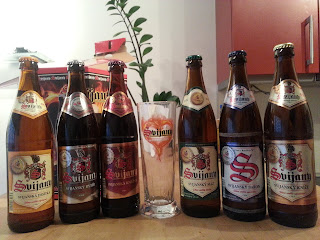 The 'knezna' was the best, dark and brooding like Heathcliff in beer form. The 'desitka' was the least enticing, being somewhat watery and bland. The rest were of a muchness, with the 'Rytir' being slightly hoppy and worth a shout. 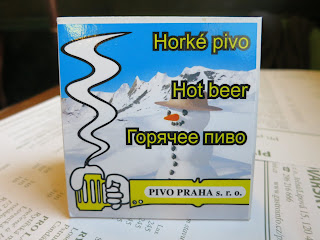 Who's ever heard of hot beer? Pivovarský dům, that's who. They use one of their fruit flavoured beers to make it - this one is caramel flavoured. 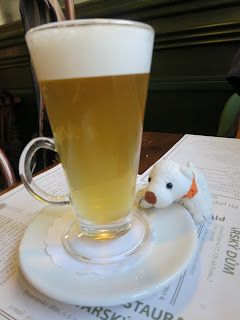 It does actually taste of beer a bit, despite the head being more like the head of a coffee, which doesn't actually disappear... a novel idea, although I can't see it catching on. 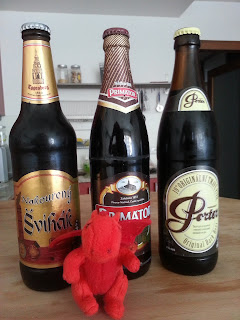 Three more Czech attempts at something different: a smoked beer, a stout, and a porter.
The smoked beer, from Cesky Krumlov brewer Eggenberg, was a decent beer but had far less of a smoked flavour than the Franconian versions; some would say that that's a good thing. The 'Primator' stout was also a perfectly good stab, although not particularly distinctive.
I approached the Pardubický Porter with extreme trepidation; the German 'porters' are the vilest thing you will ever taste. Imagine my surprise, and utter joy, to find that it is an absolutely rip-roaring porter, full of the plums, damsons and fig type stuff, and bursting with flavour. Wow.


After a month in Czech, I can say without a smidgen of doubt that Czech beer urinates on German beer from a great height. Not only are the bog standard pasteurised and filtered Czech beers far, far superior to their German counterparts, the wide availability of non-pasteurised and especially unfiltered beers means that a re-run of the Euro 96 final, but played with beer instead of football, would result in an 18-0 thrashing in favour of the Czechs.
Posted by Beeron at 18:14