So heavily are the towns on the "Romantic Road" marketed by the German tourist board that some nutter has actually gone to the extent of seemingly passing a law that all signs or notices of any kind have to be written in the Gothic script to give it that old-world feel. Even oriental restaurants seem bound by it... 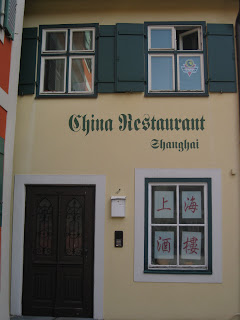 I'm not convinced the Silk Road extended into Bavaria but never mind. Half the time this simply means you can't tell what the heckity-heck something is trying to say, or what street you are on; the town is pretty by itself and doesn't need this silly nonsense. 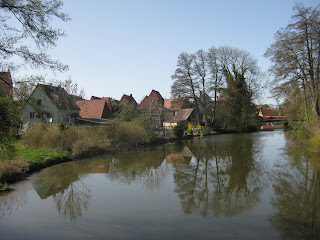 They would be better advised marketing these towns for their breweries, of which Dinkelsbühl has two. Weib's Brauhaus is a funky little place in the Altstadt which does the usual offerings, and has a Witch motif which is very popular in these parts. 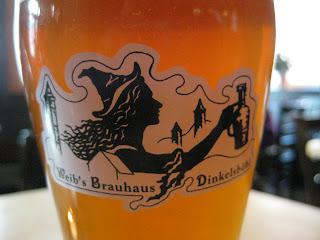 I could taste no puppy dogs tails, but instead a decent fruitiness. In the new town lies the Hauf brewery, whose beers are available at many of the towns' Cafes. They make a very nice Helles which shows that this style doesn't have to be as dull as it often is in Munich. 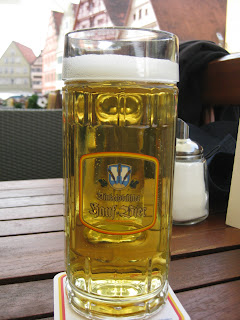 Yet again we have small Franconian breweries teaching the big boys how it should be done.
Posted by Beeron at 07:17