If, unlike me, you've seen a film called "Willy Wonka and the Chocolate Factory" (would you let a child watch a film with a character called Willy Wonka?), then you'll recognise Nördlingen because apparently there's some arial shots of it in the film. This is the old 70s version by the way, not the newer one starring the geezer who thinks he can do a cockney accent but can't. It's got a completely intact city wall which you can wander along, and is built in the middle of a meteorite crater, which is something not many towns can claim. 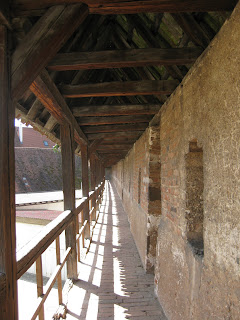 Something else going for it is the very fine Anker brewery... 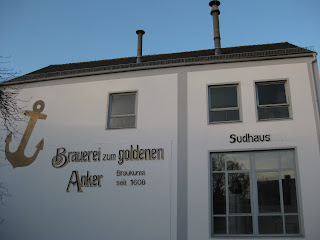 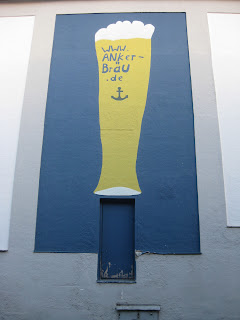 They brew what is possibly the finest weissbier I have tasted. It just gushes out the fruit flavours and pisses on the vast majority of Munich's weissbiers from a great height. 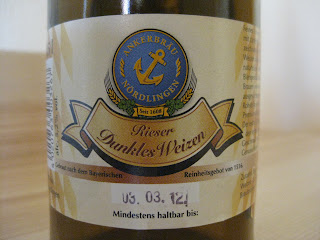 Munich brewers take note: this is what a Weissbier tastes like when you give it care and attention, and prioritise the flavour of the beer over churning out vast quantities of it at 5 cents cheaper than your competitors.
There is also a convivial Irish pub, which has a decent selection of bottled German beers. 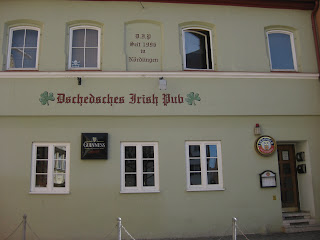 Like many German towns it can be as dead as a dodo at night even on weekends, but of course you don't come to a town like this to rage.
I'm beginning to notice that my opinion of German beer goes up the further I get from Munich...

On a different note, oh the poor Blades, doomed seemingly to be in the same division as Wednesday. I haven't been there since 2003 but from all accounts for beer Sheffield is one of England's hotspots. What a shame that for football it's the pox-ridden bell end.
Posted by Beeron at 19:51