Pinball is the second coolest thing ever invented, after beer. There used to be loads of pubs with pinballs, but you hardly see any now - there's only one pub in Munich where I've seen a pinball and that's full of drugged out teenagers. To play pinball now you have to go to dark smelly places with fruit machines. There's almost always something wrong with them as well - the sound doesn't work, the flippers don't work, they're at the wrong angle to play properly or something. This Arnie machine was a case in point: 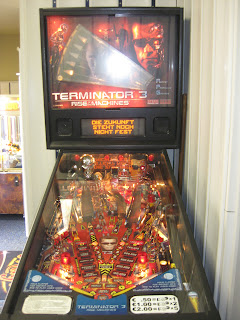 The scoring read out on the back only started working after a few balls, although the flippers were in surprisingly good nick.
Two of the best things about Australia are a) you can now laugh at them again for their ineptness at cricket, and b) there are pinballs in loads of pubs. Even better than that, they actually have container things attached to the side to put your beer in. Pure genius - the simplest ideas are always the best. When I used to play pinballs in pubs in Britain, you had to balance your beer on the front part of the glass, and if you started giving the machine a bit of welly you risked spilling it.
Posted by Beeron at 20:07