The Heller's brewery in Cologne was described by Michael Jackson as a "maverick", and representing one of the new generation of German brewpubs from the 1980s. This Kolsch is apparently the filtered form of another of their beers called Wiess (indicating a 'meadow' beer, nothing to do with Weiss, a wheat beer).
Remembering this, I was well chuffed when I spotted this in the Bio shop I found a few weeks ago. I've only tried a couple of Kolschs and both were pretty much a waste of space, but I'll wait till I try it in a pub in Cologne before condemning the entire style. 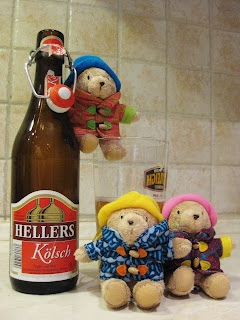 When you're used to German beers which very heavily favour the malt over the hops, any sort of bitterness comes a pleasant surprise, and this one pleasantly surprised me. Michael Jackson stated that in this version the hops were more subdued than the Wiess, so if I spot that anywhere I'm leaping on it straight away and stuffing it down my trousers before some other cad gets his mits on it.
Next was another Pinkus, who make the exceedingly decent Pinkus Alt. 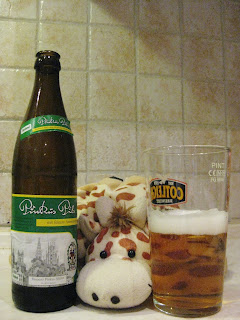 Definitely more going on in there than your bog standard German pils, but coming after the Heller's it didn't quite match up. I'll still try more Pinkus whenever I see them though.
With Pinkus Alt and Heller's Kolsch I now have two very drinkable beers I can get cheaply here without having to get pricey internet beer - though it's as weird as a bottle of chips that I have to go to a Bio shop to find them.
Posted by Beeron at 08:07