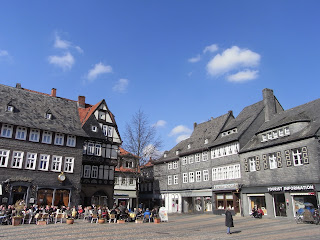 But how authentic is the modern version? A wheat beer flavoured with coriander and salt sticks two fingers very nicely into the nostrils of the 'gebot, but how similar it really tastes to its ancestor of course we'll never really know. But it's great that styles are being revived; any chance of a Broyhan any time soon maybe?
First up the dark version, from a cafe in the main square: 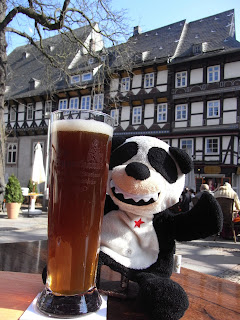 This reminded me in roughly equal parts of a standard German Weissbier, a Belgian Witbier, and a lambic. There was a sourness there, though quite mild, and the coriander and salt gave it an edge without being individually noticeable. Very drinkable, and a blessed relief from the smelly 'gebot.
The five second walk across the road took me to the Goslar Brauhaus, and the light version: 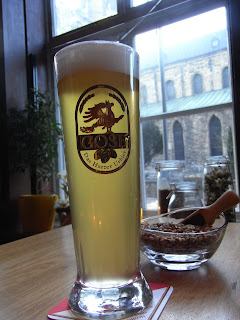 In appearance and taste this was much closer to a Belgian Witbier. We can only hope that these zombie beers catch on because Germany desperately needs beers like this. There were an encouraging number of people drinking it around Goslar, so fingers crossed.
The Brauhaus also makes its own pils, which I didn't want bringing me down after the euphoria of a non-gebot beer, and also a seasonal beer. Unfortunately I'd just missed their Altbier, so had to settle instead for the Marzen: 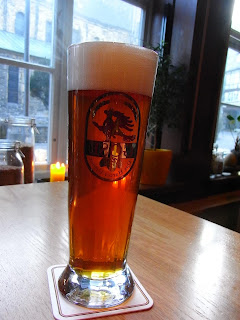 It made the frequent mistake of the extra maltiness being unbalanced, giving a sickly sort of sweetness I don't care much for.
Posted by Beeron at 07:10