Four on the floor: Altbier

I sometimes undertake the thankless, frustrating and somewhat pointless task of trying to convince German colleagues that there is such a thing as non-German beer. The level of banality of responses I get is beyond belief. Last year at a work barbeque I took along what I thought was an extremely safe bet (as I recall a Hobgoblin, a London Pride, a Honeydew and an ESB). One cretin opined "there must be lots of chemicals in it, it tastes strange"... this was a Hobgoblin mind, not a Geuze mixed with fermented ferret sweat. I tried explaining about top fermented yeast and the like, although it would have been an equally productive use of my time explaining quantum theory to a piece of cheese.
There is one colleague however, who comes from Dusseldorf, who likes everything I give her to try. She's used to drinking Altbiers and so doesn't get spooked by the idea of a beer with flavour. Recently on a trip back to her home town she brought back some Altbiers for me. I vote her a capital fellow. 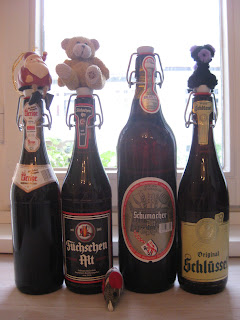 Um Uerige is the only one I was familiar with, although the version I'd tried before was the Doppelsticke from Bierkompass, which is undoubtably one of the finest beers I've had. This is the standard version, which although still splendid doesn't quite have the same depth and complexity.
Schlussel was a fine malty beer although it had slightly too much carbonation for my taste. The two I preferred though, and was quite suprised about, were Fuchsen and Schumacher. Both had a wonderful hoppiness which I wasn't expecting in an Alt. Fuchsen was as foxy as its name suggests, and luckily Schumacher did not attempt to force me out of my chair with a late breaking maneouvre or sudden jab on the steering wheel. Neither did it almost break my neck whilst leaping at me after madly charging out of its goal.
Posted by Beeron at 07:04

Email ThisBlogThis!Share to TwitterShare to FacebookShare to Pinterest
Labels: Altbier