What would you do if your doorbell rang, you opened the door, and there was a large beer standing there?
It would probably depend on which beer it was. If it was a Paulaner, you would maybe smile uncomfortably, say "not today thanks", and politely but firmly close the door. If it was John Smiths Extra Smooth, you would scream "get out of my street you sick FREAK", slam the door in its face, and send out an instant Paedo Alert with the local neighbourhood watch scheme. If however it was a Trappist Rochefort or a St Bernadus, you would invite it in, make it a cup of tea, give it some digestives, and listen earnestly while it advised you on your "salvation". You would then perform whatever initiation rites were required to join its particular splinter group of the moonies or whoever.
These thoughts were set in motion by the picture on the front of  "Soester Hell". 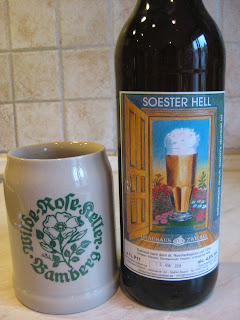 Check out the wicked "Wilde Rose Keller" mug that I got from Bamberg.
The fact that "Hell" means light can give rise to some names / phrases that sound slightly uncomfortable in English - on the next street to me there is a "DR HELL" whose name emblazoned across the front of his premises probably doesn't attract too many English speakers into his clutches.
For some reason it comes in a giant sized one litre bottle... it really is enormous... 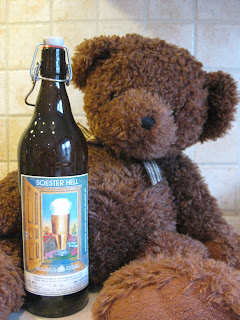 If this lady were to knock at my door, I would invite her in, but only into the hallway while I found the Betterware catalogue that she had put through my letterbox a few days earlier, from which I would purchase one of those chopping boards that fold in the middle, so all your sliced carrots go in the pot rather than on the floor. I would advise her that she could definitely come again, but that next time she should bring a more varied catalogue (more hops to balance the malt), and maybe lose some weight (come in a smaller bottle so it fits in a standard fridge door).
Posted by Beeron at 06:23