"Zoigl" beers are my latest attempt to make headway in the confusing myriad of Bavarian unfiltered lagers. 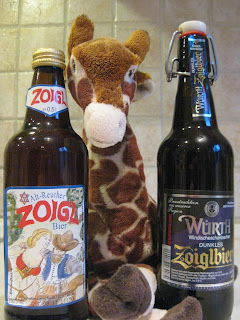 From what I can gather, a "Zoigl" was a sign a brewer would put on their door indicating there was beer available inside - that's the two stars of David you can see on the Alt-Reuther one. These historically would be small communal brewhouses in the Oberpfalz area. Nowadays I imagine it's nothing more than one of the many variations on Kellerbier - there wasn't anything in particular which made these two stand out from the other unfiltered lagers I've been churning through, except that the Wurth was darker (but not as dark as a Munich dunkel). Of the two the Alt-Reuther had more depth.
Posted by Beeron at 10:34

Email ThisBlogThis!Share to TwitterShare to FacebookShare to Pinterest
Labels: Zoigl