Galeria in Munich is getting slightly more adventurous in its selection of non-German beers. The other day I spotted a couple of Samuel Smith beers I didn't know existed - organic fruit beers. 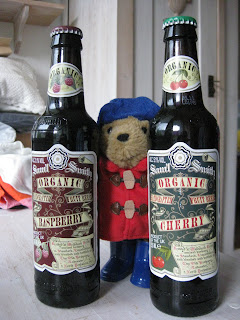 They seem to be some sort of collaboration; on the blurb on the back it says the base beer is brewed at Melbourn Bros', a Stamford brewery, using organic barley and wheat, and then Sam Smiths add the fruit juice and mix it with more beer in Tadcaster.
The bane of most fruit beers is excessive sweetness - far too often they taste like some shitty alcopop. I don't even think the better lambic based ones are worth bothering with.
With these fellas the first thing you notice is the massive whiff of the fruit which bludgeons your nostrils into a pulp. That's followed up by a massive fruit burst all over your tongue, finished off with the maltiness of the beer. Clearly this started off from a decent foundation for the fruit to work on. There's a tiny bit of sweetness but it doesn't at all feel contrived.
At 4 euros a shout I won't be making these regulars, but they would be awesome on a hot summer's day, and certainly raise my expectations of what a good fruit beer can be like. Nice one Galeria, Melbourn Bros and Sam Smiths.
Posted by Beeron at 07:15