"Landbier", as far as I can tell, doesn't really mean much at all. It seems to suggest a beer which will be quaffed by a hardworking ruddy-faced peasant, who after a day in the hop fields will come home to his wife (who is also his sister) and down a flaggon of "beer of the land", which has a dead spider floating in the earthenware jug. He will then have sex with his goat before turning in for the night.
More specifically I would expect it to be unfiltered, and it should certainly be unpasteurised, although these characteristics don't seem to be defined anywhere. Perhaps it's just a marketing term? 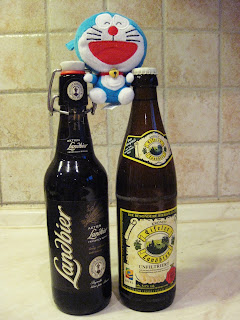 "Eifeler Landbier" certainly wears its unfiltered nature up front, in capital letters no less. It whooshed in the bottle a bit and had a marvellously thick head. It actually tasted like a Franconian kellerbier, and I would have certainly been happy with this if the peasant's sister / wife had served it to me out of a barrel in a barn in the middle of a field in Franconia. A refeshing lack of carbonation, like Kellerbiers, and one I'd definitely go back to.
"Aktien Landbier" had gone to the dark side, and wore its filtered / unfiltered nature under a black cloak. Whether it's filtered or not I didn't find it very exciting, although it was still marginally better than your average Munich dunkel. 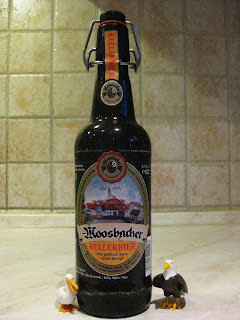 Kellerbier seems to amount to the same thing as Landbier, except here it seems that unfiltered and unpasteurised is an essential characteristic. Moosbacher Kellerbier tasted like... all the others to be honest. Malty, highly quaffable, plenty of juicy flavour, whatever.

Of the three though the Eifeler wins hands down. One of the few bottled beers I've had here that I'd definitely return to.
Posted by Beeron at 07:55