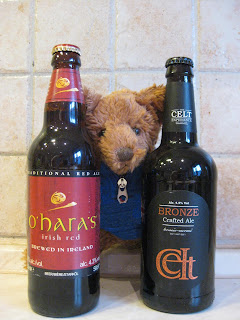 A while back I lived in a town in the centre of Ireland for six months and didn't find the beer choice too great. Of course Guinness is everywhere but not particularly exciting, and the other beers available all tended to be pasteurised keg stuff. But apparently a craft brewing scene is emerging and beginning to find its way into pubs, so I'll have to search some out next time I'm over there. Luckily Bierzwerg has one, namely O'Hara's Irish Red, and a splendid example of a Red Ale it is. Lots of malty flavour and better than a Hobgoblin. I hope one day Irish pubs the world over do this instead of Guinness.

Next up was "Bronze Crafted Ale" from a brewery called rather bizarrely "The Celt Experience". Ah, the Celts. There can be few ancient tribes about which more complete and utter horseshit is believed. According to popular myth, the Celts swept out of the near east bringing their unique culture to much of Europe, before themselves being pushed out to the outer fringes of the British Isles by ravaging Germanic hordes. However since we've had actual evidence (in the form of mitochondrial DNA and Y-Chromosomes) to base our knowledge of European ancestry on other than guesswork, this idea has turned out to be, like the Reinheitsgebot, a load of bollocks.
In fact the Celts were simply a tribe who lived in southern France and northern Spain, and never had the slightest thing to do with the British Isles. In reality the population of Britain and Ireland has remained pretty much static since not long after the last ice age. A mistake by a Welsh Philologist in equating Gaelic with Celtic and another mistake by a Roman historian in failing to understand where the Danube rose, has given this obscure tribe a central place in a widely believed mythology, which is of course what Napolean said history really is.
One recommendation: don't try explaining any of this to a drunken Scotsman at 3am in a grotty bar on the Reeperbahn in Hamburg who claims to be a "Celt". I can tell you from personal experience they will not appreciate having their illusions shattered.
The beer itself was pretty decent, more hoppy than the Irish Red Ale, but not quite matching its flavour.
The result: Ireland 3:2 Wales, with a disallowed last minute goal for Wales due to a handball from Craig Bellamy that the referee managed to spot.
Posted by Beeron at 10:13