When I was a doley in Sheffield with bugger all cash, I used to shop exclusively at Netto, and from Netto I would drink exclusively Viking Bitter - nothing else was good enough. About two and a half percent ABV and less than 20p a can - but this was way before the modern era of cheap booze from Tescos and the like. Many times did I wonder which ingredient the Viking had contributed, and from which gland it had flowed, but it was cheap and that was the main point.
Penny Markt is a German equivalent, and a very fine place it is too, pile it high and price it low. I was curious to see what their beer was like, so grabbed an Adelskronen Weissbier. Only 33 cents, which is scarcely more than the 25 cents deposit you pay on the plastic bottle. Three for a Euro, can't be bad. 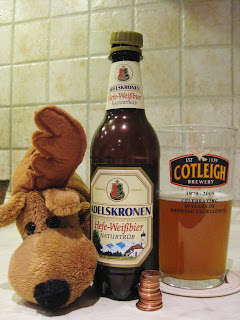 Yes I know you don't drink Weissbier from a pint glass but I haven't nicked a Weissbier glass yet and I got that free from Gaz at the British shop when I bought some Cotleigh beers from him.
That picture was taken about 10 seconds after it was poured, but even if I'd have been quicker I wouldn't have caught the head, so feeble was it and so quick to disappear. At least if you were gagging for it you wouldn't have to wait impatiently for it to go like you do with many Weissbiers. Just about smelled like a Weissbier if you sucked in with your nostrils really hard.
A bit watery and a bit lacking in the clovey banana thing, a bit on the sour side compared with some others, but overall perfectly drinkable.
Thilo Sarrazin's son should start drinking this every day to set an example and get back in Daddy's good books.
Posted by Beeron at 07:19