Smoked Beer in Germany seems to me like the wrong answer to the right question, the question being: How can we make tedious predictable German beer more interesting. I dare say the good burghers of Dusseldorf have never once begged Um Uerige to start churning out a smoked altbier, because it's already so bloody good.
I'd tried the various standard smoked beers that are available in Bamberg on my previous trips, but last time from Schlenkerla I took away with me a few bottles of their smoked Weissbier to see how that combination would work. Would it be like Chris Sutton and Blackburn Rovers, or Chris Sutton and Chelsea? 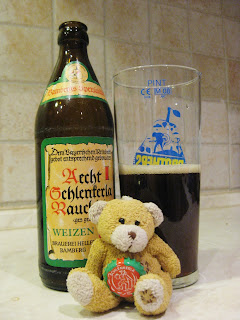 You would never guess it was anything other than the standard Schlenkerla Rauchbier from looking at it, and it didn't have the blossoming persistent head you normally get from a Weissbier. The smoked flavour was less noticeable in this than the standard Rauchbiers, which I thought was A Good Thing, but there again I didn't really get any of the fruity / clove / blah blah flavours that you do from a decent Weissbier. Miss.
Posted by Beeron at 05:59