Hobgoblin is a beer that really puts itself around; those Wychwood geezers must employ some decent marketing types. Tokyo even has four pubs dedicated to it. Here in Munich Hobgoblin, Newky Brown and Old Speckled Hen are the only English beers available at the main Irish Pub, which is something I've found in many places in Germany. It's a decent enough red ale which makes a good "stock" beer. 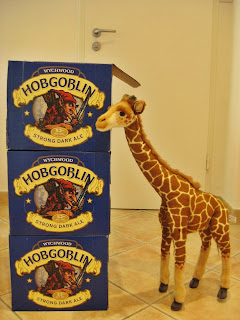 Of course many people don't like the "dungeons and dragons" image that they make for themselves, but it seems to work for them.
Because it's reasonably unchallenging and a similar ABV to most German beers, I often use it with my German and Indian colleagues to introduce them to British beer. All the ones who say it's "women's beer" get their names written in a little book, the purpose of which will become apparent to them on the day I leave.
Posted by Beeron at 06:24

Email ThisBlogThis!Share to TwitterShare to FacebookShare to Pinterest
Labels: Hobgoblin