"Bio" stuff in Germany is even more popular than moustaches, and there is a Bio-shop I walk past every day, without ever having had the slightest inclination to go inside. Today for some reason a mysterious force sucked me in, and to my surprise I found a large range of interesting looking beers.
Due to the limited range of bio ingredients, particularly hops, bio-beers are rarely popular, but my eyes were drawn to one, Pinkus Alt, by the word "obergarig" splashed across it . It's top-fermented Jim, but not as we know it - in Germany it's nearly always accompanied by a cold maturation, which can often lead to it being scarcely distinguishable from a lager.
I'd only drunk one Altbier before, the divine Uerige-Sticke, which those splendid fellows at Bierkompass can sometimes get their mits on. As I paid the Biocashier the pleasingly low 99 cents and scratched my Bioscrotum I pondered on whether the bio nature of the bier would prove much of a drag factor.
The first suprise was the colour - for some reason I'd got the idea in my head that all Altbiers were dark. Still, it had a nice frothy head while it lasted and a nice golden colour. 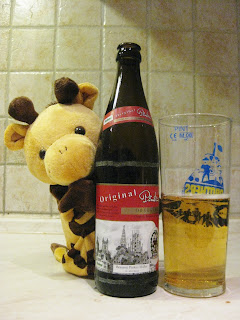 By this stage I wasn't surprised that it tasted towards the lager range of the spectrum, but that didn't matter a hoot because it was damned nice, combining the crispness of a good lager with some nice yeasty bready fruity type stuff.
The number of German beers I try that I intend to repurchase can be counted on the fingers of one hand, but if other Pinkus beers are like this I may have to become a deformed freak.
Posted by Beeron at 06:03