Störtebeker is a brewery I'd heard of from seeing their beers on an online retailer, and I'd been meaning to give them a try. Imagine my delight when I saw a six pack assortment in Penny Markt in Wernigerode. Why the buggery can't the Penny Markt in Munich sell stuff like this? Here's their take on a Porter, "Hanse Porter". 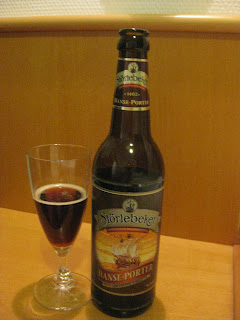 I'm no beer historian but I vaguely understand that when Porter was brewed in the Baltic area, at some point during the Pils revolution which swept across Europe like the Black Death, Porter there became a bottom fermented beer. I would like to postulate another event which I feel contributed to the history of this beer, which is hitherto unknown: there was once an accident at a storage depot involving a lorry load of Hanse-Porter and a lorry load of sugar. The containers were ruptured and the contents of each mixed. Afterwards nobody realised it wasn't supposed to be that sweet, and carried on brewing it with equal parts malt and sugar.
The resemblance to cough medicine is uncanny: I suggest the label should be changed to show a stern matronly figure holding out a spoon, with an exhortation to "drink it all up now, it's good for you."
Perhaps the Penny Markt in Munich knew something I didn't.
Posted by Beeron at 08:46