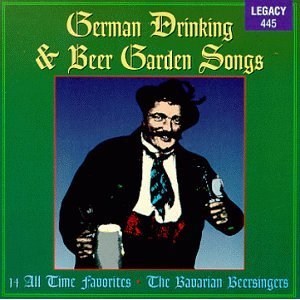 The Reinheitsgebot has been called everything from the world's oldest consumer protection law to a load of bollocks. It's fair to say that the vast majority of German beer drinkers would side with the former, and a considerable number of foreign beer geeks in Germany would side with the latter. It's been said that it's the Gebot that is one of the principal causes of the retarded nature of the German beer scene - but is it really deserving of the stick it gets?
One good thing about the Gebot is that, when you get a beer in Germany, by and large you know what's going to be inside it. It's been said that what's really required is just a law forcing breweries to list the ingredients on the bottle, but that wouldn't do you much good if you walked in a pub, were confronted with ten taps, and then had to quiz the barmaid in intimate detail about the presence or absence of adjuncts in each beer. She might not know, might think you're a freak, or even bite you on the chin. And would there also have to be a law forcing all restaurants and bars to list each beer's ingredients on menus? What if you can't see the beer you're ordering?
There are very few truly awful beers in Germany. There are many, many dull ones, but very few that can even remotely compare with vile putrescent filth such as 'extra smooth', 'cream flow', 'smooth flow', jiz flow and all the disgustingly repulsive chemical piss that often passes for beer in the UK. Although it annoys the hell out of me, when Germans say that British beer is shit it's easy to see why they've ended up thinking that.
If you're a German tourist visiting London, say, unless by luck you go in a pub with cask conditioned ale, and unless you happen to know that, instead of a brand you recognise you're supposed to order the one called Olde Flatulence Smelly Cock or something, then chances are you'll drink something shit. Have a beer on a train or in a hotel or somewhere and they'll probably end up drinking piss. The fact is that, wherever you are in Germany, in a zoo, a Vietnamese restaurant, a cinema, a park, a museum, or a kebab shop, you can get a beer which, although it might not be very exciting, is going to be of a certain basic standard. Would it be like that without the Gebot? I wonder. I remember once at a station in Italy I picked up a German beer from a brewery I hadn't heard of in the expectation that it would be adjunct free. When it tasted like water I checked the ingredients and guess what - adjunct city. Let them loose from the Gebot, and see what they get up to.
For sure, being limited to the ingredients dictated by the Gebot is restrictive, and there are many fantastic beers and beer styles that can't be done under it, but there are also a hell of a lot that can, and if German beer covered all those styles there would be no problem. What's to stop a German brewery doing a Gebot-compliant IPA? Absolutely nothing, apart from the small fact that German drinkers wouldn't drink it. Churn out the usual suspects of a Helles, a Dunkels, a Pils and a Weissbier and they'll lap it up.
The Gebot can be a pain in the arse, it's true, and lends German beer a mystique it doesn't remotely deserve, but is it really as guilty as it's made out to be? I don't think so.
Posted by Beeron at 17:49

Email ThisBlogThis!Share to TwitterShare to FacebookShare to Pinterest
Labels: Reinheitsgebot