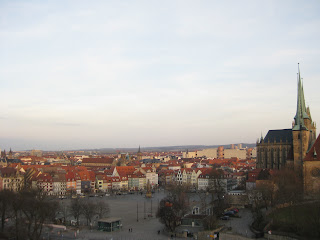 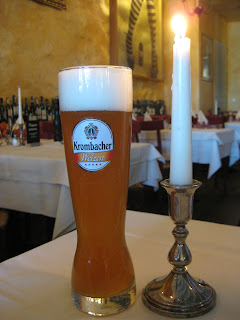 Not a patch on a Schneidder, seemed to lack any fruitiness... maybe I should lay off the Weissbiers up this next of the woods. 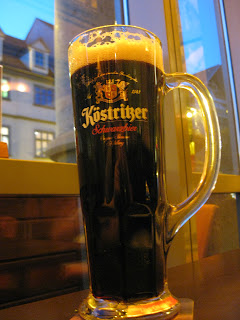 I've tried many times to like their Schwarzbier, I feel like I ought to like it, but I find it distinctly unexciting. Maybe it's the Gebot preventing it from having any sort of taste you could vaguely describe as black. Having said that, a cold glass on draft did wonders for my dusty throat.
The Erfurter Brauhaus mentioned in Ron Pattinson's guide has unfortunately long since passed away. I wonder if the owners ever said to themselves: "Hey, rather than brewing exactly the same beer styles as all the other brew pubs round here, why don't we try brewing something different? Maybe one of the beer styles which are proving extremely popular in other brewpubs around the world? Then there might be something to differentiate us from the competition, we might even kick start a beer revolution in Germany and become rich and famous?!?! Nah, let's not bother, let's just brew what everyone else is."
Posted by Beeron at 20:21