The Starkbier season is slowly poking itself into life, and "-ators" are appearing everywhere.
First stop was the Unionsbrau in Haidhausen, one of Munich's better brewpubs. 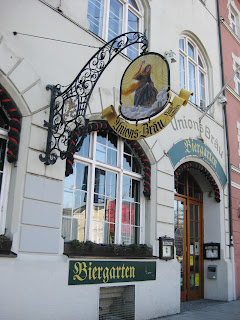 Their "ator" is called Unimator... 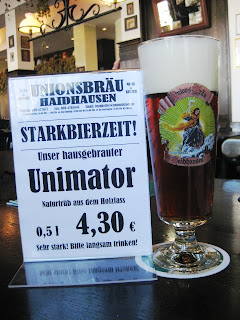 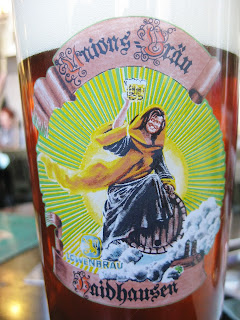 This was like drinking a cream bun. The extra sweetness wasn't as sickly as you get in something like the disgusting Leffe (which ages ago put me off Belgian beers until I found out it wasn't at all representative), but it was still a bit too cloying for my tastes. I drank it rapidly in deliberate defiance of the exhortation on the menu to drink it slowly. Am I a rebel or what.

Next stop was the Paulaner brewhouse just off Marientplatz. Paulaner's name is mud in Munich, drinkers here preferring Augustiner. But their "ator" offering, the well known Salvator, was much more to my taste. 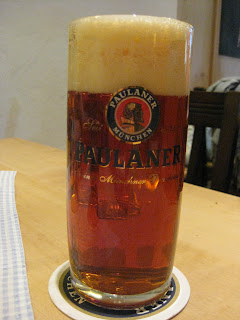 Very malty, but disguises the sweetness well. A wicked bite to it, and I could have drunk ten of these. I don't normally eat at these brewpubs, preferring to eat bogies to the revolting lumps of gristle that they dish up, but today I spotted something intriguing. 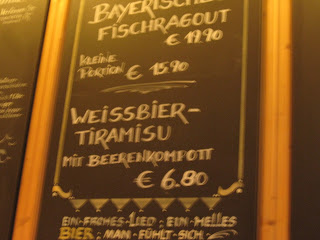 Biramisu surely they could have called it? Or they should have made it with Salvator and called it Biramisator. 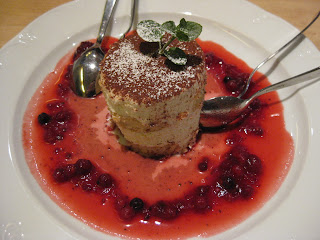 I'm sure they could have found a more appropriately sized plate. I could just about detect the Weissbier.
Posted by Beeron at 07:25