Next stop was Quedlinberg, featuring another funky Altstadt and a couple of castle-like fellas. 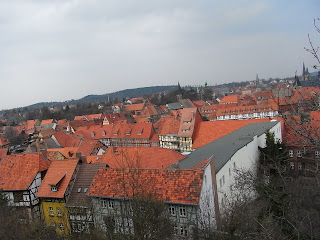 Of course much more interesting than any of this Unesco world heritage nonesense are brewpubs, and Quedlinberg features Lüdde-Bräu. 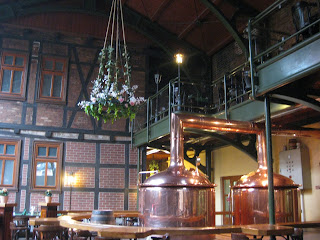 A spankingly smart place with helpful staff, it was virtually empty when I walked in but fairly heaving half an hour later. First up was the Schwarzbier: 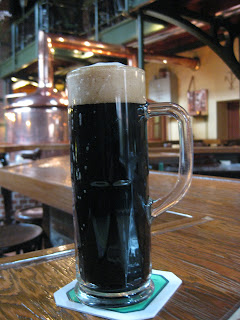 Nothing much to distinguish it from other instances of this style, but at least it was a change from the dreaded Helles. Next was the Pils: 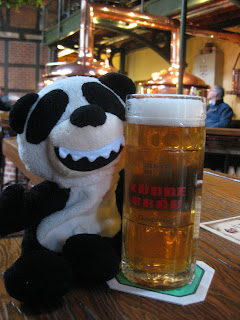 If you're making a cheap supermarket Pils, then I can understand why you would tone down the hops: the majority of casual drinkers just don't go for bitterness in a big way. But if you're a brewpub, wouldn't you want to make something a bit closer to the original style? If not, why are people supposed to go out of their way to drink your beers? Disappointingly unlike a genuine Czech Pilsner. So far A for effort but C for attainment.

I was beginning to get a slight sense of Deja-Vu by now: whereas in Bavaria the "triad" consists of a Helles, a Dunkels, and a Weissbier, up here the bog standard offerings seem to be a Schwarzes and a Pils. But to Lüdde-Bräu's eternal credit they do brew one other beer, Pubarschknall, a 1% top fermented brown beer: 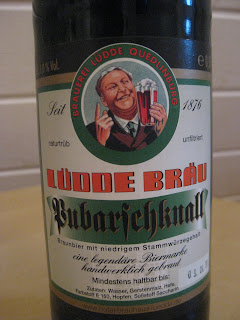 Why do blokes on beer labels all have to be holding up one gammy finger they've just picked their nose with?
Despelling that thought I took a four pack back to the hotel to quaff as I had an early train to catch and didn't want to feel groggy. I'm glad to report that it's a very decent brew, the sweetness you often get with low ABV beers not in any way overpowering. At only one percent the remaining bottle made a nice breakfast beer as well.
Posted by Beeron at 07:14