I'd previously bought a bottle of Cranberry syrup to accompany some Wöllnitzer Weißbier, a Jena beer in the style of a Berlin weiss. I know you're supposed to drink them with Raspberry syrup but I couldn't find any so Cranberry it was. The syrup certainly took a bit of the edge off the sourness of this beer. Upon trying it au natural, I've seen peoples' faces turn as if they've just seen Sadako.
Being tight and not wanting to waste the rest, but unable to think any other practical use for it, I thought I'd try an experiment to see if it did anything to improve a six month old bottle of Geuze I had sitting underneath my bed in my overheated bedroom in my rabbit hutch in Munich's inner city haven of TV stars.
And so the experiment began... two glasses, one without syrup, one with, and a judge... 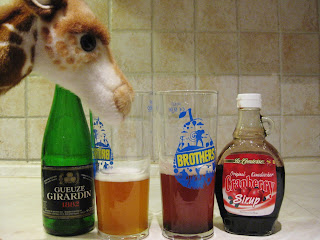 The first thing to be noticed was that the "plain" Geuze was not as sour as I remembered from the last time I'd had one from the same consignment six months ago. Whether six months under my bed was really long enough to do that to the beer I don't know; I find "beer memory" can be very misleading.
The cranberry syrup in the other one complemented the natural taste of the Geuze quite well; it added a fruity side without totally masking the sourness.
In future though I'm going to drink my Geuzes plain, but only after they've been sitting around somewhere sweaty for six months.
Posted by Beeron at 06:12