One of the few German beers available in Munich supermarkets which I occasionally buy is Mönchshof Kellerbier. It's got a nice orangey colour and tastes almost syrupy. So when I spotted this fella I had to give it a try: 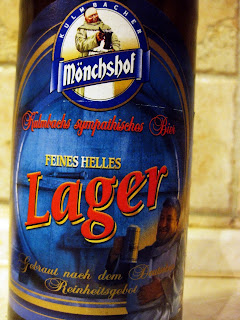 Many times I have tried a Helles in the forlorn hope that I would one day find one that was more interesting than listening to Coldplay, and each time have vowed never again to waste my time or euros. In this case though I didn't: although it's nothing outstanding, it was noticeably more hoppy than a standard Munich Helles and was far superior to most I've tried. It didn't particularly leave me wanting to rush out and get another, but neither did it leave me wanting to poke my own eyes out in bitter regret at having wasted my beer tokens.
Posted by Beeron at 07:35