Many blokes get all hot and sweaty at the thought of Angelina Jolie. Personally I find that very confusing, but I suppose you have to envy such people as all they need to do to achieve gratification is to hang around ponds and lakes, where they will see many other creatures that resemble, and indeed are, ducks.
But there is one duck like creature that did get me excited when I saw it: Duckstein.


This is made by the Carlsberg group but is apparently a resurrection of a 15th century North German beer style. I'd been meaning to try it for ages, but of course it's totally unavailable in any shops in Munich. Cor blimey gov'ner, we don't want any of that bladdy northern muck here, no we don't not never. 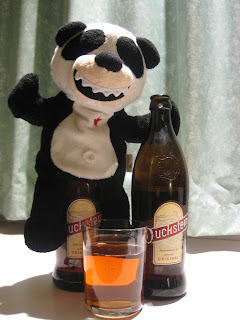 This looks and tastes like a genuine red ale, none of this "top fermented but cold matured so it tastes like a lager" stuff. If someone had told me it was Hobgoblin I would have believed them. At about 1:60 euros a bottle it's twice as expensive as a normal supermarket beer, so I would imagine they don't shift much of it.
Posted by Beeron at 08:23

Email ThisBlogThis!Share to TwitterShare to FacebookShare to Pinterest
Labels: Duckstein