The price of a beer is so rarely mentioned in beer reviews you'd almost think it was irrelevant, and mentioning such matters of trade would be coarse. Well some of us are scrooges and count every euro cent. Although I'm always keen to try out anything by a German brewer trying something different, my curiousity has limits.
Whilst perusing Galeria, my eyes were diverted from the usual crappy Helles by this handsome looking fella 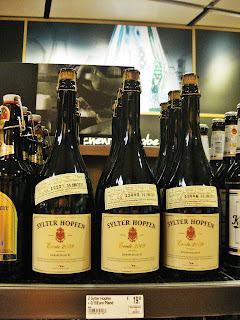 I eagerly reached for a bottle until I noticed 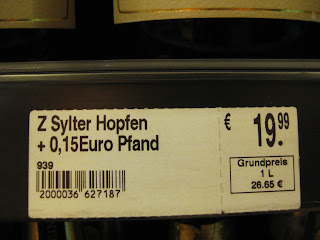 At that per litre price it's well over four times what I could get the same amount of Rochefort 12 for from Bierkompass, my guide price beer. I checked the website later and it's full of bollocks about what wonderful malt, hops and yeast it's got in it, but are they claiming it's four to five times better than what those Monks are using?
So did I buy one? Did I bloody buggery.
And how does it taste? I don't know.
Posted by Beeron at 05:46