My mission today: investigate Hopfen-Weisse. This is the collaboration between Brooklyn breweries and Schneider, much written about in the US but not so much here. I'd trawled Munich's supermarkets for this and never once spotted the bugger, so the place to go was clearly the Schneider pub near the centre of Munich. I once tried coming here on a Sunday morning at 11:30, and the place was heaving without a seat to be had. Sound. 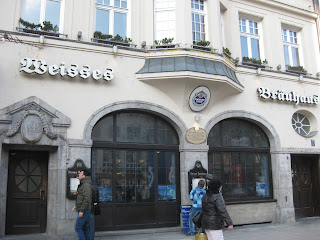 Given Bavarian drinkers' notorious conservatism, introducing a beer which is heavily dry hopped, albeit with local Hallertauer hops, seems a brave move. By all accounts it hadn't caught on, so I was interested to see if I would be the only person drinking it.
It's a fairly typically designed Munich beer hall on the inside, a similar sort of demographic with a mixture of over 50s locals and some tourists. It is far less touristed and the staff infinitely more pleasant though than the truly obnoxious Hofbrauhaus. 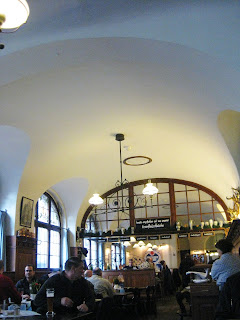 A quick perusal of the menu showed that I wouldn't be disappointed: there it stood alongside Schneider's other beers. 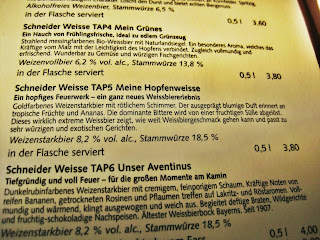 And.... voila. Presumably because of the higher ABV they give you a dinky 33cl glass to drink it out of instead of the regular Weissbier glass. 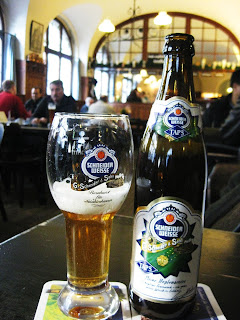 So the hops... they're there alright, and if I didn't know better I might have guessed they were American, so unusual is it for Hallertauers to be remotely prominent in a German beer. They're definitely not overpowering though, far less in your face than any American IPA I've ever had. It still had the nice fruity / clovey / whatever flavour of their standard Weissebier.
So who else was drinking it? I did a quick tour of the fairly packed pub and tried to count the number of other people drinking out of this style of glass. The total? Zero. Oh well, nice try folks. As I said, you can't seem to buy this in any of the local supermarkets, not even the up-market Galeria, but I've no idea whether that's because Schneider didn't even bother trying, or they tried and nobody bought it.
From past experience of trying to introduce German drinkers to slightly different beer styles, I suspect that were I to walk round the pub with a cattle prod, forcing everyone to drink this beer, the overwhelming response I would get, from the male drinkers anyway, would be "Women's beer". This would sorely tempt me to insert the cattle prob into their cortex via their ear.
Whilst I supped, the entertainment was provided mercifully not by an Oompah-band, but by a table of Chinese tourists, one Lady of whom was attempting to engage the waitress in conversation using Shenyang-dialect Chinese. There was not a hint of expectation on the Lady's face that she would not be understood. After the waitress and two of her colleagues had given up, I twigged what it was she wanted and wrote "Baileys" on a piece of paper and gave it to her, to spare the misery of waitresses elsewhere on her itinerary.
As I left I congratulated myself on not having written, "Please milk my flabby breasts."
Posted by Beeron at 07:13